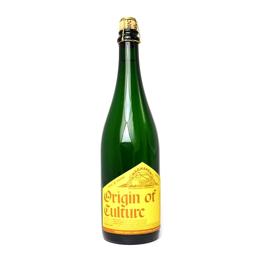 In our relentless pursuit of exploring new grain and malt variety in our beers, we are proud to introduce to you Origin of Culture. We took a base grist consisting of 75% Danish Pilsner malt and 25% Danish unmalted emmer to produce this new Rustic Danish Shipyard Ale.⠀
⠀
Emmer, or emmer wheat, is a grain rich in history. It is native to the Fertile Crescent of the Middle East and was widely cultivated in the ancient word. Barley and emmer were the primary ingredients in ancient Egyptian bread and beer. Emmer is part of a group of “ancient grains” know as Neolithic Founder Crops, which are attributed to early human civilizations shifting from hunter gatherer to agricultural. Now considered a relict crop, emmer is still farmed in very small amounts in various parts of the world. ⠀
⠀
Much in the same way emmer helped shape the history of civilization, it helped create Origin of Culture. ⠀
⠀
Origin of Culture was generously hopped with aged hops in the boil. French Strisselspalt and New Zealand Motueka, and Wai-iti hops were used in the whirlpool to bring a gentle balance of fresh cut grass, floral, and mild undertones of lemon and lime. ⠀ ⠀
Origin of Culture was open fermented with our unique house yeast, and then aged in French Oak Chardonnay barrels for 8 months, bringing notes of vanilla, mild coconut and a slight acidity.⠀
⠀
Origin of Culture Blend 1 was packaged in November 2019 in green 75 cL bottles and is naturally conditioned.⠀